How a British Subject Became President of the United States 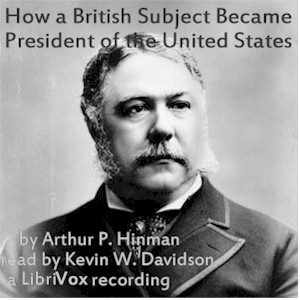 How a British Subject Became President of the United States

LibriVox recording of How a British Subject Became President of the United States by Arthur P. Hinman.
Read in English by Kevin W. Davidson

In 1880, the New York Times reported a curious story from St. Albans, Vermont, about a mysterious figure, an attorney and Democratic operative named A. P. Hinman. Hinman privately told local Democratic leaders that he had been hired by the Democratic National Committee to obtain evidence that Vice-President-elect Chester A. Arthur was not qualified to hold the office of Vice President, but rather that Arthur was a Canadian-born alien. President Garfield was assassinated in 1881 and Arthur became twenty first President of the United States, and a pretty good one by all accounts. Hinman published this book in 1884 to prevent Arthur's re-election, unaware of Arthur's real secret, that he was dying, and would not seek re-election. This is a conspiracy theory about presidential eligibility that could have come from today's newspapers. - Summary by Kevin Davidson

Uploaded by librivoxbooks on May 8, 2015